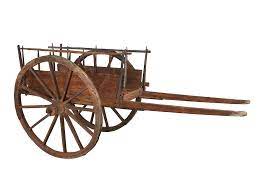 It is a Red River Cart or some would know it as the Metis Cart. The Red River cart was a mode of transportation used by Métis people in the Prairies during the settlement of the West in the mid- to late-1800s to carry loads across distances. The name of the cart derives from the Red River, along which the Red River Colony (1812–70), inhabited mainly by Métis peoples, was settled. The Métis had their own Michif words for the cart, including aen wagon and aen charet.

Who is the Metis nation? 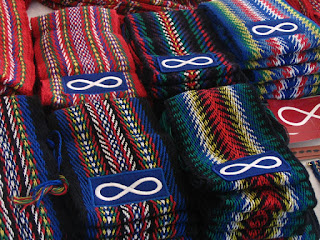 "The Metis nation and culture began when the early European fur traders and First Nations created families to form new Indigenous communities.  There are stories of Metis using their small horses for logging and for pulling sleds as their communities moved from season to season.  Then later on, they started to use the Red River carts with their big wheels.  But wherever the Metis traveled, there was music and dancing." - Alison Cox, Elder

The Metis Cart is a medley of two songs.  The first is Ants, Mosquitos, and Snowball Fricasse.  It is a French Metis song that is traditionally sung to children by elders.  The second is Wigwam Polka by Andy DeJarlis.  The piece is high energy and joyful, capturing the spirit of the Metis music and dance.

The Metis Cart by Kevin Lau (performed by the WSO)
The Metis Cart song has a form or pattern to it.  Listen the song to discover the form and patterns.
Intro A A A A A*      Bridge    B C B Coda
(Ants, Mosquitos...)                        (Wigwam Polka)
Here is the first song in the music.  Listen for the words.  What language is this?  This song was traditionally sung to children by an adult.
Ants, Mosquitos, and Snowball Fricasse
Let's keep the beat as we listen to this song.
Here is the dance to the first song from the WSO recording (see above to practice with the WSO music):
Here is the second song you will hear in the WSO music.
Wigwam Polka
Identify the Major and minor melodies of this song.  Listen to the music and how it changes in sound quality based on a set of notes that are used to create them.  The set of notes is called a scale.  One melody is minor in which the music will sound dark and maybe a bit sad.  The Major melody will sound bright and happy.
GAME: sit down with the music is minor sounding and stand up with the music is Major.
Play this game.  Can you identify if it's Major or minor?
Posted by Ms. Rempel No comments:
Email ThisBlogThis!Share to TwitterShare to FacebookShare to Pinterest

Our Divisional Children's Choir led by Mrs. Neufeld at Westwood Collegiate is auditioning Gr. 4/5 students for this honour choir next week (May 25, 26, 27 & 31).  Students interested can see Ms. Rempel for more info but parents have to sign their child up for the audition and fill out this online form

1. Sign up for audition TIME: https://www.sjsdchoirs.ca/childrens to select an audition time.

2. Complete the online application form BEFORE YOUR AUDITION at: https://forms.gle/yHkkLB7WbfCsRzMZ7

Audition Process will include:

❖   Singing a prepared selection of your OWN CHOICE or “O Canada” either with the piano or a capella. I want to hear your voice and see your style/energy. I am looking for quality performances with evidence of preparation.

A choir song we are working (for Rockin' Robin, just do verse 1 and chorus)
OR
Music Alone Shall Live (sing in higher register)

❖   Singing the canon “Row, Row, Row Your Boat”, “Freres Jacques” or “To Stop the Train" to determine voice independence.

❖   Please be sure the online form is completed prior to attending your audition.

We are now practicing for a June performance.  Good luck with your practicing at home!

Life's a Happy Song - with vocals

Life's a Happy Song - accompaniment only 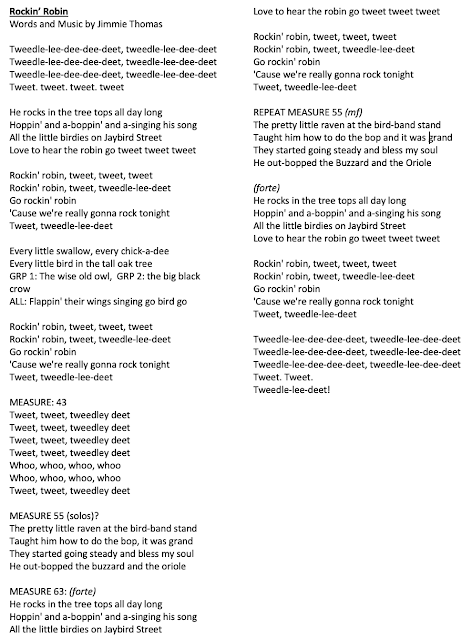 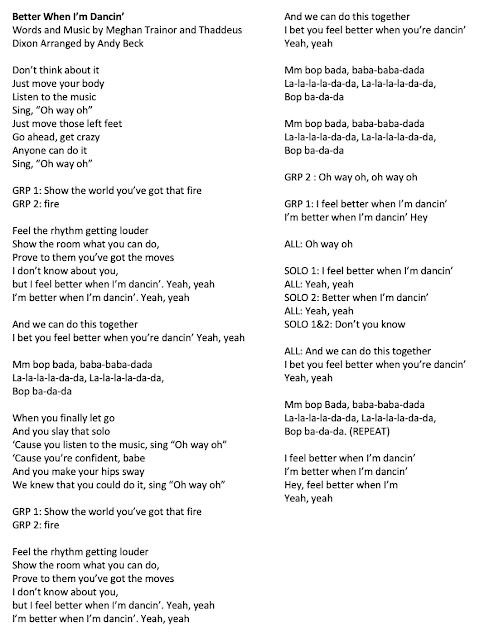 My Favorite Things - accompaniment only 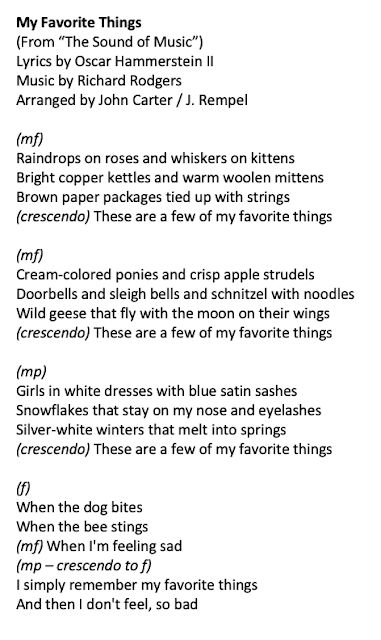 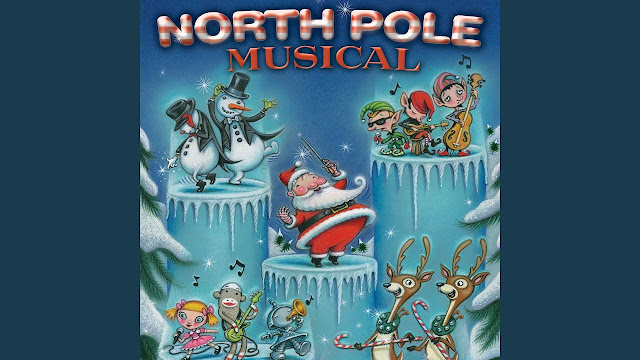 Auditions are underway for the 400th Anniversary in the North Pole and everyone is in a panic.  The cute snowflakes are in a flurry of excitement for their number.  The dancing Reindeer are "hoofin' it" but don't know what to do with clumsy Rudolph.  The elves are tired of always getting the short end of the stick and are singing the blues.  The snowmen are "chillin' but worried about the funky hot lights and the toys are trying to do the entire Nutcracker Suite in 3 minutes!  The show keeps getting bigger but is it really better?  See how Santa finds a way to remind everyone of the true meaning of the season.

NEW YEAR - Back to School! 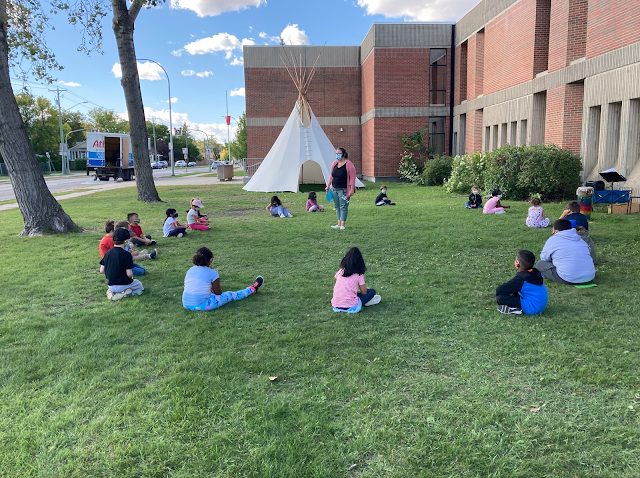 Here we are back at it outside for music! 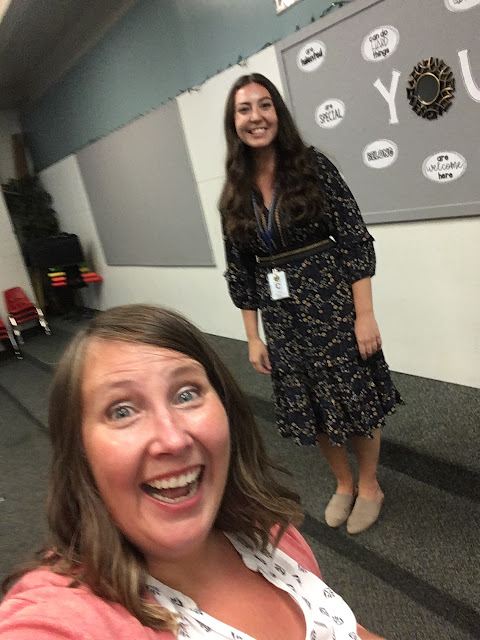 And welcome to our new music student teacher, Miss Heinrichs.  She's excited to be teaching along side me and taking over teaching music classes in November.  We are so lucky to have her at Stevenson.
Posted by Ms. Rempel No comments:
Email ThisBlogThis!Share to TwitterShare to FacebookShare to Pinterest
Labels: back to school; September; outside

Back in April, Stevenson had a couple of student volunteers, Ilya (Room 5), Haylee (Room 12), and Ali (Room 11), who came and rehearsed a single part for the Finale performance that is showcasing today!  They did an amazing job and a shout out to them today for their participation in this exciting performance that will be shared across our province.  Their video submissions resulted in this amazing, virtual performance! This final video is a representation of the high quality music programs in elementary schools across Manitoba. The students in this video demonstrate exceptional focus, precision, musicianship, and dedication to doing their very best at "making music together, while we are apart". We had over 40 Manitoba students, representing 18 Manitoba schools (several from our division), making music "the Orff way"!
Posted by Ms. Rempel No comments:
Email ThisBlogThis!Share to TwitterShare to FacebookShare to Pinterest 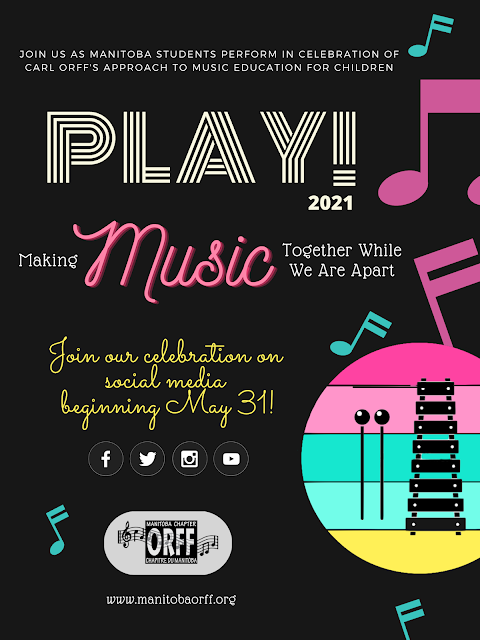 Play! 2021. From May 31 to June 11 we are celebrating Elementary Music Education in Manitoba through a new, virtual format.   Thank-you to the Manitoba Orff Chapter for all your work in advocating music education in our province.  We can still make music together while we are apart!
And thank-you to our Principal, Ms. Couch and Vice-Principal, Jackie Gagne, our Winnipeg Jets Hockey Academy Coordinator, Janelle Forcand, and our very own students performing in the Friday Finale: Ilya, Hailey and Ali!
From our very own SJASD music teacher, Manitoba Orff president, Mrs. Charisse Wurch!
Thank-you Ms. Gagne and students for sharing the importance of music!
A beautiful picture painted of why music is important for the WSO Assistant Conductor, Naomi Woo
Highlighting Play! events from 2014 and 2015
Posted by Ms. Rempel No comments:
Email ThisBlogThis!Share to TwitterShare to FacebookShare to Pinterest 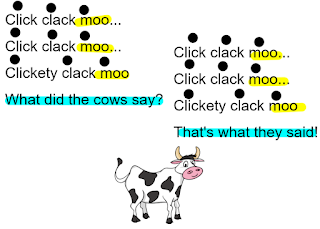 This month for I Love to Read, we've been exploring the various non-pitched percussion instruments we have in our classroom.  We have been deciding and selecting instruments to create soundscapes and that make good sound effects for different parts in our stories.  Our Grade 1/2 classes are learning an arrangement to CLICK, CLACK, MOO Cows that Type by Doreen Cronin.

We first listened to this fantastic performance that was created around the sounds of the typewriter, many of which my students had never seen or heard.

Today as I was looking at different videos for this performance, I came across another fun one using sandpaper blocks.  Not everyday you hear a solo performance and symphony experience centered around that instrument!

Reach for the Stars

In 2013, I wrote this song with Ryan Miller for our school and we have been enjoying singing it for the last several years.  Even though we can't sing it right now in the classroom, we are learning the movements.  The message is still the same as we care for ourselves and each other, coming here to learn new things.
Posted by Ms. Rempel No comments:
Email ThisBlogThis!Share to TwitterShare to FacebookShare to Pinterest
Labels: choir, school songs, singing

Here is the Nutcracker story and song in 3 minutes!  Ready, set, GO!

Where we all belong

WORD TO THE WISE 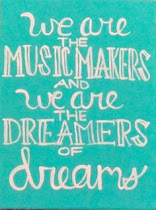 Reach for the Stars